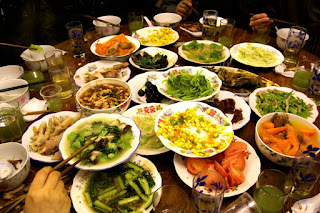 Spinach Noodles or bo cai mian: Called bo cai mian in Chinese, spinach noodle is among the famous Chinese dishes of Xi’an. Most noodle joint prepare their boodles from scratch. Spinach noodles are prepared using spinach topped with any ingredient you want. The most popular form is spinach noodles topped with potato, egg, beef, carrots and chili, served in a spicy sauce of tomato.

Fried Mashi or chao ma shi: No, it is not some kind of fried noodles or fried rice but something like gnocchi. A great combination of hot and sweet, fried ma shi is one of the best dishes in a traditional Chinese food menu of a restaurant. The addition of crunchy vegetables gives it a yummy juxtaposition to the softness of ma shi.

BBQ Meat or kao rou: The third on the list is the standard type of meat served in China but considered as one of the popular traditional foods of China. The dish is heavily spiced and is available in both street carts and restaurants. Mostly cooked on burning coal, the meat sticks have several variations. You can choose from lamb, chicken, beef and also gizzards. There are even varieties that most Westerners don’t generally eat. You can try something different!

Cold Vegetable Dish or liang cai: The literal translation of liang cai is ‘cold dish’ prepared with vegetables, peanuts and tofu. It is served with a sauce or marinade.  The common vegetables used include cucumbers, beans, cabbage and lotus root, amongst the smart assortment of other items that suits the dish in the best way.

Stinky Tofu or chou dou fu: Do not go by its name, as Stinky Tofu might smell the worst but it tastes better than the smell. If you see the sidewalks brimming with people choking out with the thick haze of stench, know that there’s Stinky Tofu been sold at a street car or food eatery. The traditional Chinese dish is quite delicious compared to its taste, especially when served with the right seasoning.

Dumplings or jiao zi: One of the best Chinese dishes to order in an authentic restaurant, Dumplings are a classic food item not to miss when exploring Chinese food. You get to choose from different varieties of dumplings – beef, veg and pork. You can have it fried or steamed with the sweet and spicy flavored sauce or dip. The popular form of dumplings served I China includes dumpling dipped in a mix of black vinegar and chilli sauce.

Mutton Stew or yang rou pao mo: This one on the list is another favorite traditional Chinese dish of Xi’an people after spinach noodles. Pao mo is served with different items such as mutton, beef and pork. The one we are talking about is mutton stew. It doesn’t include noodles instead have unleavened bread that soaks the delicious flavor. The dish is served with picked garlic and chili sauce.

Cold Mixed Tofu and Pineapple Aloe vera or liang ban dou fu and bo lou lu hui: It is a large brick of tofu placed in a mixed sauce of chili, oil, sesame and other unknown yet delicious Chinese flavors and topped with fresh green vegetables. This typical Chinese dish is served with a drink of pineapple and aloe vera. Yeah, the one which you use for treating a sunburn! It tastes mushy and sweet which is not always a delicious combo but the pineapple at the end serves for a good aftertaste.

Yak Meat Dumplings or momo: Tough not quite a traditional Chinese dish in the mainland China, but momo are quite famous and common in Western China and Tibet. Yes, we know about the conflict of Tibet territory but it is available in the People’s Republic of China, so fair enough to be included in the list. The juicy yak meat stuffing I the dumplings make it melt in your mouth as soon as you take a bite. Once you have it, it will be one of the most unique Chinese dishes you will ever have.

Make a list of what all things you want to try from this list of traditional Chinese food and make sure you tick off each one of them while exploring the beautiful country of China.

Popular posts from this blog

7 Beautiful Places to Visit in Chennai for an Exciting Celebration

August 01, 2018
Chennaiis located at the South of Indiaand it is one of the metropolitan cities. The place has a vibrant culture with traditional history. There are several tourist attractions and night-out spots to keep the folks and travellers entertained. If you are in Chennai and wish to pursue some unique activities for the evening and night, you should definitely check out the places mentioned below.

Chennai is a cultural hub. It hosts plethora of drama, music, art, and dance shows. The city prides in Bharatnatyam dance and Carnatic music. You can frequent to evening and night shows of performances. Visit Kalakshetra (a cultural centre), it organizes music and dance events by great artists. You can even head to Egmore theatre or Alliance Francaise to watch a play. Music Academy on TTK Road is also a good place for concerts and performances. Thus, by attending cultural shows, you can have a nice moment with your close ones in the night.

Restore yourself with an exciting excursion by thronging to the heart-winning vacationer spots to visit in Ooty, which is otherwise called the Sovereign of Slope Stations in South India.  For flight ticket  booking call AA Customer Service .
Best places to visit in Ooty:
Tea Gardens


Out of the considerable number of spots to visit in Ooty and every one of the exercises to enjoy, outdoors by the Tea Gardens should be over your can list. In case you're a traveler, you can get yourself a nature walk or a climbing background here. For the old soul in you, there are warm campfires that you're certain to construct recollections around. What's more, …
4 comments
Read more